Laxman aelay is born in 1964 at Kadirenigudem village of Telangana, Aelay Laxman is highly reputed artist for his contemporary depictions of the rural Telangana imagery. Like many other successful artists, he too started his artistic journey as a sign board artist and illustrator before coming to the mainstream art. Now, Awarded PhD from The English and Foreign Languages University, Laxman completed his Masters in Painting from Jawaharlal Nehru Architecture and Fine Arts University, Hyderabad and worked as an Art director for films. He is credited with numerous important shows and was part of several art camps held in India and abroad.

Laxman’s vibrant quasi-realistic paintings and arduously drawn imagery evoke a sense of apprehension and nostalgia. His men and women in typical Telangana attire proclaim their cultural identity. His first solo show in 90’ was titled, ‘Images of Kadirenigudem’, on the name of his native village. From then on, the representation of Telangana life in all its vitality and vigor become his personal visual idiom even in his recent one man show, ‘Fellow Travellers’ in 2014. The paintings at his very recent solo show in Jehangir Art Gallery, Mumbai, titled ‘Fellow Travellers’ demonstrate  highly skillful renditions of portraits layered with imagery taken from folk arts of Nakashi, Kalamkari, Paithan etc. These larger than life size hyper realistic images of street performers, itinerant bards and tantalizing common people are built and rebuilt over multiple layers of motifs that burst from his subconscious memory revealing predicaments of oppressed communities. 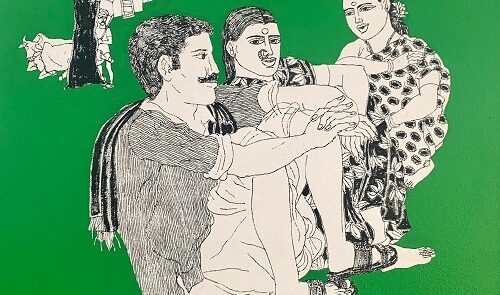 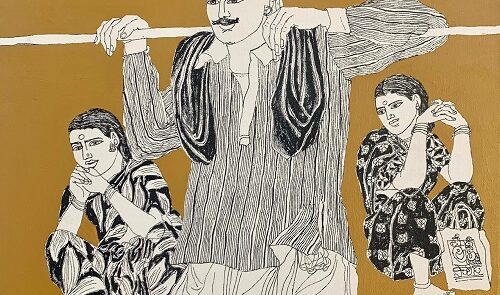